The Turkish government has been heavily critised for implementing censorship on the Internet and other media. Currently, over 100 000 websites are officially blocked in the country. Additionally, popular websites such as Twitter, Facebook and YouTube have been frequently blocked with or without a court order. Other than officially blocking websites, Turkish Internet Service Providers (ISPs) have recently been allegedly forced to implement more “creative” methods for limiting access to certain sites.

According to the local Twitter and Facebook users, these social media platforms suffered a slow-down during the first half of October 2015. The traffic on the sites was slowed down, and although the sites were theorically accessible, they became so slow that they were practically inaccessible.

At the beginning of September 2015, the Turkish authorities imposed a nine-day curfew on Cizre, a city of 120 000 inhabitants near the Turkish border with Syria and Iraq, in support of an “anti-terror” operation against suspected Kurdistan Workers’ Party (PKK) members. The curfew included, besides preventing anyone from entering or leaving the city, blocking all access to Internet, as well as to mobile and landline telephone, or severely restricting them. Council of Europe Commissioner for Human Rights, Nils Muiznieks, demanded that independent observers should be allowed to enter the city. He stated that the situation “combines an exceptionally severe interference with the human rights of a very large population and a near-complete information blackout.”

After the bombings of a peace rally in Ankara on 10 October, in which more than 100 demonstrators lost their lives, the government imposed a temporary broadcast ban on the images of the attacks in print, visual and online media, and warned media organisations not observing the ban that they could face “a full blackout”. The banned footage included also lines of riot police appearing to block a road near the blast site, with ambulances parked in the background. Protesters claimed that the police blocked a road being used by ambulances, and prevented them from transporting victims to hospitals. The ban has been criticised by organisations defending human rights for violating freedom of expression and assembly, for exacerbating tensions within the country, and for undermining opportunity for open political dialogue.

Turkey to lift curfew in cut-off city of Cizre after reports of civilian deaths (12.09.2015)
http://www.dw.com/en/turkey-to-lift-curfew-in-cut-off-city-of-cizre-after-reports-of-civilian-deaths/a-18710280

Image by Pete Linforth from Pixabay 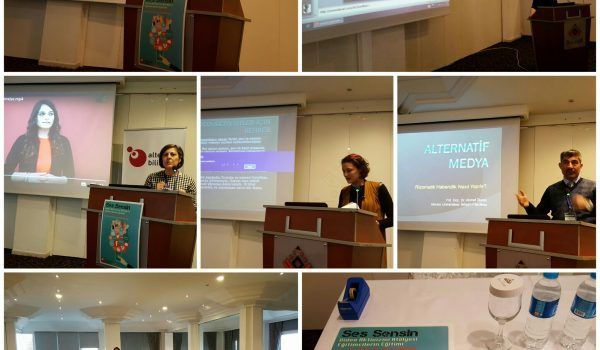 “You Are The Voice”: Video Activism Workshop for NGOs (Training of Trainers) was organized with the contribution of the Think Civil EU Program in Ankara in 2016 and in Mersin