The law proposal and its justification, which has been presented to the presidency of the Turkish Parliament by the approval of Justice and Development Party about the change in “The regulation of internet-based broadcasting and the struggle with crimes that are committed via these broadcasting” is a threatening text in many ways. The motion, which is expected to be passed inattentively within an omnibus bill will not solve the existing problems. It includes suggestions that would deteriorate the current status.

Firstly, at the justification part of the motion, there is not a reference to the decision of European Human Rights Court against Turkey with regard to this law (no. 5651). This decision, which has been made as a consequence of Ahmet Yıldırım Case that Alternative Informatics Association took it to the EHRC, approved the opposition of this law against freedom of expression. What Internet users need in Turkey is a reform of this law in terms of rights and freedoms and all of the access restrictions should be excluded from the regulations. However, the motion suggests the exact opposite by centralizing and empowering the access restrictions.

The motion also pays no attention to the views of NGOs, which are important actors of the subject. Each NGO that work within the informatics field in Turkey is strongly criticizing this law. Moreover, not only NGOs but also a great number of lawyers, bureaucrats, politicians and internet publishers also criticize the law. In contrast to the motion, they do not consider access restrictions as a solution.

It’s really sad to see the motion uses “the discrimination card” to justify the restrictions. Censorship never should be considered as a solution to solve racism, hatred speech and sexism. Since we have lots of examples of how the government interprets and enforces this kind of laws in the recent history of Turkey, we’re concerned that this justification will cause much more dangerous enforcements in the next days.

On the other hand The ISP Union proposition will threaten net neutrality and help large companies to entirely dominate the market. Only the companies with the proper ban and control utilities can be a member of this unity and the other non-member companies cannot able to provide internet services anymore which leads some of them to file for bankruptcy and hand the market in to the big players. Decreasing agent numbers on the market will help the government to control and monitor users much more easily. Rising of the controlling and surveillance because of the Weak compotation on the market will be a threat for our rights and freedoms and especially for net neutrality.

The projected period for the ISPs to retain data is 1-2 years which is a very long period. The Government’s need for retaining data for this long, brings to mind the possibility of using the data to profile people for various purposes or even worse to tag them. Considering all the subjects we mentioned above, it’s safe to say this regulation will make the situation much more worse. We believe that amending Law No: 5651 will only empower the parts of the law which are criticized by the people for a very long time.

As we stated in our Association’s “The State of Internet in Turkey in 2013 Report” [1] what should be done, is not to extend censorship and banning policies but to bridge digital divide, to popularize the usage of internet and to improve the new media literacy.

As the Alternative Informatics Association we are in the favor of a freer and less controlled internet where people freely express themselves and access all the information they need without any surveillance. Unfortunately this regulation ignores the objectivity of the networks, makes it easier to restrict the freedom of speech, controlling and surveillance on the internet by establishing monopoly. Carrying a motion with this content will cause the internet in Turkey to plunge into the darkness permanently.

We invite the members of the parliament who legislate law in behalf of internet users, the users, NGOs who represent them and the subject matter experts to consider the verdict of (ECHR)

We also invite our citizens to look after the Internet and to support the events actively which will be held Worldwide against censorship, control and surveillance acts. 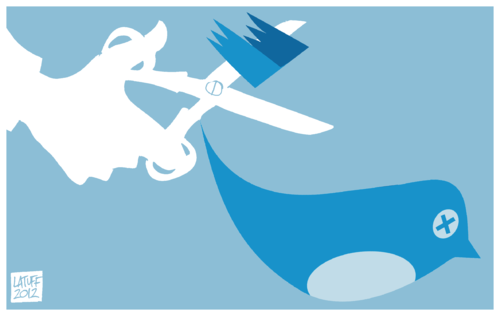 The wave of resistance that started at Gezi Park on the 29. of May in Istanbul and has since spread all over Turkey once again revealed a deep connection between